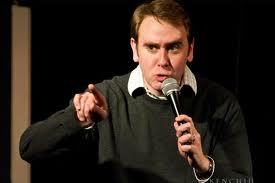 Although a St. Louis native, this Rice University graduate got his comedic start in 1999 right here in Houston at the beloved Laff Stop. He soon developed his trademark style of blending obscure impressions into his stand-up routine. Mike’s television debut was on Comedy Central’s Premium Blend in 2001 and he has since performed on The Late Show with David Letterman, NESN’s Comedy All-Stars, and was also a cast member on the TBS sketch show Frank TV. In 2009, Mike was invited to perform on the Master’s Showcase at the Montreal Just for Laughs Comedy Festival. He has also lent his distinctive voice to numerous commercials, video games, cartoons, anime, and Cartoon Network’s Adult Swim.

Now a resident of Austin, TX, Mike performs in comedy clubs all around the nation. He is heard regularly on syndicated radio programs such as The Bob & Tom Show and The Jimmy Dore Show. Mike was also recently invited to perform at SXSW and the Moontower Comedy Festival in Austin, Texas. And tonight, he’s with us. END_OF_DOCUMENT_TOKEN_TO_BE_REPLACED