Animated, physical and downright hilarious, Since he first started to pick up the mic, John Gard was Houston comedy scene fixture. Winner of Houston’s Funniest Person in 2009, John recently made the move to Los Angeles. I met with John before his show at the Houston Improv. We talked about his humble beginnings, his experience in theater, prank calls, along with life’s twists and turns.

END_OF_DOCUMENT_TOKEN_TO_BE_REPLACED 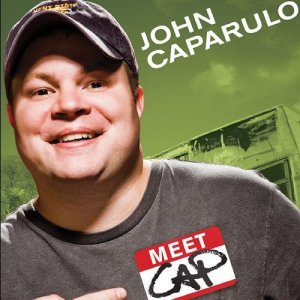 Also known as ‘Cap’, John Caparulo is a Los Angeles comedian best known for his appearances on Chelsea Lately. But that’s not all he’s known for. Cap’s first big break came in 2003 when he appeared in Montreal’s Just for Laugh’s Comedy Festival. From there he appeared on The Late Late Show with Craig Kilborn and also the Tonight Show with Jay Leno. Cap had the opportunity to feature for the Blue Collar Comedy Tour, and he was also one of the comedians from Vince Vaughn’s Wild West Comedy Tour. Caparulo’s first comedy special, Meet Cap, aired in 2008 on Comedy Central. Cap hosts “The Mad Cap Hour” radio show with his wife Jamie Caparulo, and comedian Mark Ellis which is found on Sirius XM as well as iTunes. He is currently in the middle of a tour working on his latest special, which will be filmed at the South Point Hotel & Casino in Las Vegas on April 6th. Cap was cool enough to hang out after the show and share a bit of his wisdom. END_OF_DOCUMENT_TOKEN_TO_BE_REPLACED 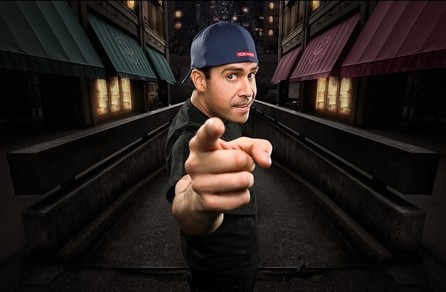 You know him as the ‘Little Tortilla Boy’, and the ‘Movie Preview Guy’—and Kermit the Frog—and Sylvestor Stallone—and Arnold Schwarzenegger—and Scarface’s Tony Montana—and so much more! Pablo Francisco is an American stand up comedian whose popularity spans all over the globe. Not only does he perform sold out shows in the United States, but he’s also sold out world renowned venues, such as the Milky Way in Amsterdam and the Troxy in London.

Introduced to the world in 2000 with his half-hour special on Comedy Central, Pablo then toured as one of The Three Amigos alongside Freddy Soto and Carlos Mencia. Pablo later released his first special, Bits and Pieces: Live From Orange County. He then followed up with Ouch! Live From San Jose, and most recently They Put It Out There. Pablo’s unique ability to point out the world’s absurdities with clever insight while weaving together his off-the-wall arsenal of animated characters has kept audiences on their feet and coming back for more. We’ve been so lucky to talk with Pablo about comedy, and about his early days, his struggles, the comedy business, random TV show ideas, and his hilarious personal stories. Pablo is in town this Valentine’s weekend right here at the Houston Improv. You don’t wanna miss it! END_OF_DOCUMENT_TOKEN_TO_BE_REPLACED

Chicago-bred and New York based, Hannibal Buress began his comedy career back in 2002. By 2007, Time Out magazine named him the ‘Funniest Person in Chicago’. In 2009, he became a writer for Saturday Night Live and soon after, for the hit TV series, 30 Rock, in which he has also made appearances. Hannibal’s debut album, My Name is Hannibal, was released the following year, and it quickly became the number one comedy album on iTunes. His first hour-long special, Animal Furnace, debuted in 2012 on Comedy Central. Hannibal was later crowned the ‘Best Club Comic’ at the 2012 Comedy Awards. Hannibal’s TV appearances include Jimmy Kimmel Live, Late Night with Jimmy Falon, The Late Show with Dave Letterman, and The Late Late Show with Craig Ferguson. We are very lucky that Hannibal took some time out for a little chat. END_OF_DOCUMENT_TOKEN_TO_BE_REPLACED 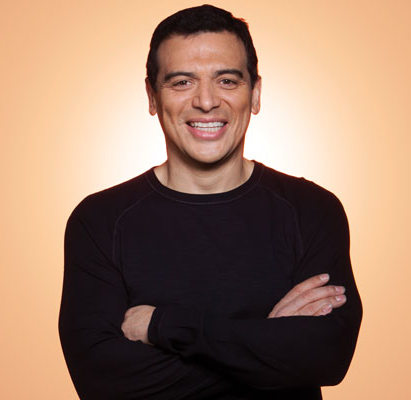 So what do people still say about Carlos Mencia? He’s a hack? He’s a thief? He’s a fraud? Carlos Mencia has been a controversial name ever since the notorious fight between him and Joe Rogan back in 2007 at the world famous Comedy Store in Los Angeles.

Rogan accused Mencia of stealing jokes, nicknaming him, “Carlos Men-steal-ia”. Other comics joining in the accusations included: Ari Shaffir, Willie Barcena, Steve Trevino, and George Lopez. Caught on tape, the feud spread like wildfire throughout the internet. And it escalated further after Comedy Central’s hit TV show, South Park, aired an episode about it.

Everybody loves success, but they hate successful people. —Unknown

Is Carlos Mencia really as terrible as his accusations? Or are people jealous of his achievements? Despite what we choose to believe about Carlos Mencia, no one can take away the fact that he’s a 25-year comedy veteran, with plenty to show for it. END_OF_DOCUMENT_TOKEN_TO_BE_REPLACED 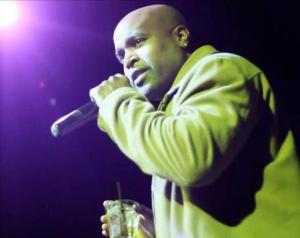 Born in Houston, seasoned in Los Angeles, Steve Flye has spent the last fifteen years entertaining audiences all over the world. And that’s just for comedy. An all-around entertainer, ever since the age of five, Flye was starring in commercials for CBS. Throughout his childhood, he successfully auditioned for a choir known as The Singing Boys of Houston. So at an early age, Flye became accustomed to performing and life on the road as he toured with the choir for years. He was granted the opportunity to perform in places like San Fransisco, Canada, and New York’s famous, Carnegie Hall.

In 1997 Flye was first introduced to comedy at Houston’s Laff Stop where he entered Houston’s Funniest Person Contest, finishing in the final four. That same year, he moved to Los Angeles, where he spent his career acting, writing, and performing comedy. Flye has made quite a name for himself out there in the Los Angeles comedy circuit, appearing in top comedy clubs, such as the famous Hollywood Improv, The Ice House Comedy Club, and The Laugh Factory. Flye has been seen on BET’s Comic View, Loco Comedy Jam, CSI: Las Vegas, and recently, Bar Rescue on SPIKE. Getting Steve Flye to agree to this interview was easy, but attaining the interview from him was rather difficult. Although, CSiH managed to pull it together and make it happen. These are the events that took place throughout the Steve Flye interview. Catch him tonight and all weekend as he performs with Corey Holcomb at the Houston Improv.

END_OF_DOCUMENT_TOKEN_TO_BE_REPLACED

Juan Villareal is a name that’s practically legendary in this city. He’s shared the stage with some of the greatest: Steve Harvey, Paul Rodriguez, Cedric the Entertainer, Jamie Foxx, and Carlos Mencia. His TV credits are outstanding. He’s appeared on HBO and Showtime, and he’s performed on BET’s Comic View an honorary eleven times—more than any other comedian. For the past twenty years, he’s been traveling the country, entertaining audiences from coast to coast. But no matter how long he’s on stage, it’s never enough. He always leaves the crowd wanting more. Get your fix this weekend, as he takes the stage tonight and tomorrow night, right here in town, at The Comedy Showcase.

END_OF_DOCUMENT_TOKEN_TO_BE_REPLACED

Duncan Trussell is a writer, actor, and stand up comedian who can be seen regularly at the Hollywood Improv and The Comedy Store in Los Angeles. He has written and appeared in sketches for Fuel TV’s Stupidface, Showtime’s La La Land, Comedy Central’s Nick Swardson’s Pretend Time, and HBO’s Funny or Die Presents. Recent TV credits include MADtV, Curb Your Enthusiasm, and Roots 3. Duncan hosts his own podcast, The Duncan Trussell Family Hour, and he frequently appears on Joe Rogan’s podcast, The Joe Rogan Experience. Currently in the middle of a tour, Duncan’s next stop is right here in Houston, tonight at Fitzgerald’s.We were lucky to meet him and talk with him about his tour, his podcast, and psychedelic meditation.

END_OF_DOCUMENT_TOKEN_TO_BE_REPLACED

The oldest member of the Texas Outlaw Comics, Andy Huggins is a veteran comic who came up during a time when Houston’s greatest included: Riley Barber, Steve Epstein, John Farneti, Jimmy Pineapple, Ron Shock, and Bill Hicks. A Houston favorite, Huggins was a graduate of both The Comedy Store in Los Angeles and Houston’s legendary, The Comedy Workshop. Throughout his career, he’s opened for Ray Charles, he’s written for Billy Crystal and The Academy Awards, and he’s developed superstars like Bill Hicks and Jay Leno. He has seen it all, he’s done it all, and he’s here to share with us his wisdom. END_OF_DOCUMENT_TOKEN_TO_BE_REPLACED 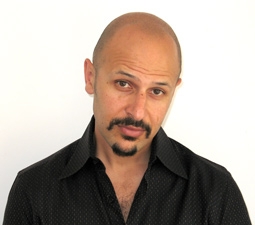 Maz Jobrani is a Persian American stand up comedian who was raised in the San Fransisco Bay Area, where he earned a degree at UC Berkeley. He was later accepted into UCLA’s Ph.D. program. While there, Maz visited the university’s prestigious theater program and was immediately hooked on acting—something he was involved with as a kid. He left the Ph.D. program and decided to pursue his childhood passion of acting and performing.

Maz’s first big break came as a founding member of the Axis of Evil Comedy Central Special, which premiered in 2007. It was the first show on American television with an all Middle Eastern American cast. The tour performed in the United States, and later went over to the Middle East, selling out shows in Dubai, Beirut, Cairo, Kuwait, and Amman, Jordan—where they performed in front of the king and queen.

Maz followed up his Axis of Evil tour with a Showtime special, Maz Jobrani: Brown & Friendly, for which he toured all over the world. He is currently working on his next special, Browner & Friendlier.

Since then, Maz has made TV appearances on The Tonight Show with Jay Leno, The Late Show with Craig Ferguson, Lopez Tonight, Comedy Central’s Premium Blend, and The Colbert Report. Maz has also played roles in Ice Cube’s Friday After Next and Sydney Pollack’s The Interpreter.

And after selling out the entire weekend at The Improv, Maz took the time out of his busy schedule to hang with us and share his story. END_OF_DOCUMENT_TOKEN_TO_BE_REPLACED