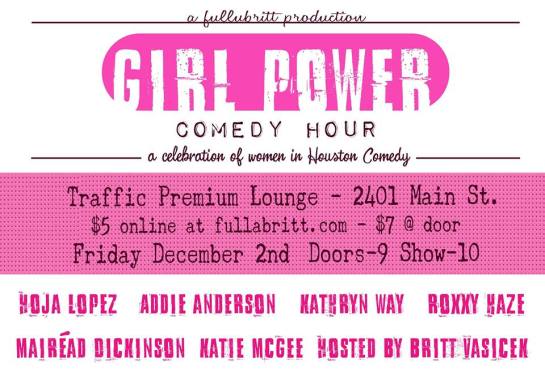 “Comedy is already hard enough. Any creative pursuit comes with a wealth of vulnerability and insecurity,” she pointed out. “I know what it feels like to be a woman constantly picked apart. I want to do everything I can to level the playing field and make women feel more confident, not less.”

When reached for information, Britt expressed that it is a priority for her to lift women up.

Britt Vasicek, a local entertainer, and writer, juggles her many passions under the name Fullabritt. She has a polyamory podcast, writes a satire blog, and does some stand-up here and there. With a taste for the non-conventional and controversial, Britt Vasicek put together a line-up that she’s proud of.

The comedian also pointed out that there aren’t as many women in Houston comedy, so they are a valuable resource for entertainment. Their perspective is not represented so much at open mics and she wants to draw out the kind of comedians she wants to hear more of.

“I get it when people say that they want to treat genders equally, but I want to see genders represented equally.”

The open mics around town are where comics get their practice and their start. At higher levels of comedy, women aren’t hard to come by. While there are still normally more guys on the bill, bookers still have plenty of women to choose from that have good chops and enough material.

In Houston, there is a significantly larger number of men than women at the beginning level. At a standard open mic in the city, there will be about 40 names on the list (give or take) and about 5 of them will be females (give or take). This does not reflect the audiences which are about 1/3 female.

While the reason for the lack of women is argued in the comments of many a Facebook post and discussed at many a bar, there doesn’t seem to be an exact point of blame. The safety risk of walking to a car at night, the insecurity of being around a bunch of drunk men, and the lack of women to relate to are some guesses.

When asked why she thinks there are fewer women at the open mics, Britt implied that it’s because women are simply better.

“I see woman hustling on their own- putting on their shows, developing lots of new and better material. I think that when Houston sees a funny woman, they book her. Open mics get less frequent when you’re doing so much real stage time.”

The show will not only feature stand-up entertainment but will feature artists in Houston. Megan Gonzales will have her wonderful book of poetry for sale and there will be a zine by Divine Feminine.

When asked why this show was so important to her, Vasicek couldn’t stop smiling.

“If you think there isn’t enough sexism in art and entertainment to justify celebrating women for an hour, then you’re the people I’m out to change the minds of.”