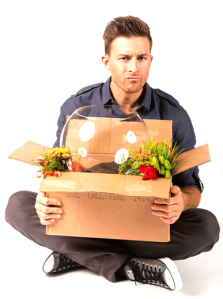 Kvon discovers a holiday was hidden from him.

What if you just found out your parents hid Christmas, Thanksgiving, and New Years Eve from you?
You’d feel angry, bewildered, cheated and confused. When comedian K-von found out his father never told him about a similar holiday, Nowruz (Persian New Year), instead of getting angry he got even and created an award winning documentary.

So you just won the Audience Choice Award at The Noor Film Festival?

Yes, just getting selected by this festival is a huge win in itself. They had over 300 films submitted and they accepted less than 40. Then on awards night we were honored to be nominated nominated for Best Director, Best Story, and ended up taking home the trophy for the Audience Choice Award! Many of the films dealt with very serious subject matters, and ours was a light, fun and educational comedy. Film critics can’t admit they love a movie like that, but the audience knew what was up!

Can you explain Now Ruz for Non Persians?

It’s Persian New Year which is celebrated in the spring time. Unlike regular New Years where you freeze, get drunk, and wake up hung-over thinking next year will be better, with Nowruz you bring buy new clothes, clean your house, then go to parties with your entire family, celebrating all night. You eat great food and you dance at parties that are fancier than most weddings. It’s a non religious holiday and each year 300 million people world wide participate. You’re celebrating life in
it’s purest form. After our first screening of the film, I had some moviegoers ask me, “I have Persian friends, why was I NEVER invited to this party?” My reply, “Now you know how I feel.”

Because I knew nothing about the holiday, I was able to get a first-class education on it from celebs and scholars on camera. So in a way it was a blessing. And winning these awards at film festivals definitely makes up for the parties I missed over the years.

So your father never told you about Nowruz?
When you watch the film you find out my father wanted us to be very American. We grew up in Reno, Nevada and there were no other Persians to visit during the spring. For us spring was Easter or whatever. We celebrated Christmas, Easter, all the standards holidays and that was that. It was my mom and dad, me and my brother and of the four of us, my dad was the only Iranian. He was outnumbered and happy to blend into American tradition.
Let me back up, how did you end up discovering Nowruz?
I discovered Nowruz right around WHEN I was touring with Maz Jobrani. He told me, “Next week we will doing some comedy at a Nowruz show!”. I was like, “Nowruz? What’s that?” A lot of people started making fun of me because I didn’t know about it. The more I learned, the more fascinated I became. I was performing with Tehran who’s a half black and  half Persian comic. So you got this guy who looks black and me a half Persian guy who looks not Persian walking into a party.  What’s even better is Tehran speaks perfect Farsi so if you just try to say something bad about him in Farsi, he’ll hit you right back with a comment and all of a sudden they’re surprised, “Uh oh, the brother knows our language!”.
Tehran took me to one of  these parties in DC and I was like “Why are they lighting all these fires out there in the parking? We’re pretty close to the White House. I don’t think we should be doing this.”
Then after the people started jumping over the flames!
Tehran explained, “We do this every year.”   I was so amazed I even joined in. In the back of my mind I thought it would be cool learn about the holiday and document it while I’m doing stand up at every Nowruz party along the way. Then I thought, “Nah nobody would want to watch that.”
Then I did a little research and found out, for that part of the world Nowruz is bigger than Christmas.  “Wait a minute, Someone would want to watch it.”  Can you imagine if no one took the time to make a Santa Claus movie? I would be the only game in town.
My initial idea was to film the documentary and separately do a one hour comedy  special where I bring all my jokes on to the stage. The comedy special “Tanx God!” was filmed after I shot the doc. Then it ended up being released a year before the documentary was finished.  It was just easier to edit.
You actually started your Crowd-funding after you shot and edited your footage? Not  many people do that. That’s a lot of initiative.
It took me 3 years to make. I even went homeless in the process to free up more funds to pay my crew. I was lucky to stay with family friends and when I went on tour I stayed in hotels, so it wasn’t that bad. Once I had finished shooting my film,  I then started the Crowd-funding. I’m sick of people asking for money before they start their project. You donate twenty bucks. A year later, nothing happens and you ask, “Where’s the project?” And they bailed on it.  I already invested all my time and money into the project. Instead of everyone wishing upon a star dreaming together, I’m just asking people to help contribute with some pre-orders and a little extra to pay some of the final costs we have coming our way. We’re taking this to Dubai, Sweden and all sorts of other film festivals around the world and there is a cost to that as well.
So how is that going on?
I was thinking a small fundraiser dinner. Get 30 people together, eat, mingle, show a clip, and I’ll explain how raising funds will help the film. The first to jump on board with this idea was Houston, Texas. But they said, “30 is not enough!”
and they put together a dinner with 70 people. So I guess it must be true, Texas does it bigger! I’m quite honestly humbled by all the support. Next up are DC. Seattle and Orange County.

So when did you start comedy and where was your first mic?
In 2006, I had a day job selling medical devices. I had a great career and made a great living. So I decided to throw it all down the toilet for this dream called stand up comedy. It was my best decision I ever made, but you wouldn’t know it at the time. I started at The Comedy Store.
The Comedy Store?
I started there because I read a book that said all these famous people started at the Comedy Store. So because legends Robin Williams, Richard Pryor, and many more started at The Comedy Store I did not want to start at some  bar in Nevada.  Little did I know that was a figure of speech. Looking back I should have “started” a long time ago and then come to The Comedy Store. It was a stupid bozo move I made. It was my mistake. It held me back for a few years, but it was a funny story.  And now at least I can say, “I started at The Comedy Store!”.
My advice: Don’t get your start at the Comedy Store. Get your start wherever you are. Get on stage anywhere, any time  and work hard. The sooner you do this, the better you get. When you become famous, they’re all going to claim  you anyway.I started from the bottom and waited in line at the Laugh Factory. After I made it in as a regular, other comics were like, “Hey man, can you put in a word and get me in?”  “I waited in line. Why don’t you do what I did?”  Most of them were like, “Because that’s for suckers!”
I’ve never had many favors or had anyone walk me into any club. It’s hard in LA, one of the clubs I go up regularly is the Ha Ha Cafe. Anyone that thinks they’re too big for the Ha Ha Cafe should know Damon Wayans perform there regularly, workS out bits, and sharpens his material there.  No matter how big you get, you have to stay humble. You just have to work hard and do all the clubs you can. You don’t have to be just in Hollywood to be funny or do just this one club, you can go to a lot places and do it.
Has your father’s attitude about stand up comedy changed?
When you talk about doing stand up to a Persian father, they don’t know what you’re talking about or what you’re doing. My father would ask, “Where did you perform last night?” and I’d tell him “It’s a place called “Starting Gate, a sports bar that does Karaoke on Mondays and stand up on Tuesdays.”   He then had a heart attack shortly thereafter.
Parents don’t see that light at the end of that tunnel. However, I took my father to the movie premier. He sat there with a sold out audience made up of people from all different diverse backgrounds laughing and learning.  Together we watched on the big screen as I traveled to 17 cities and made people laugh along the way.  He glanced around the room and with his eyes said,  “I get it. I get  it now.”
K-von will be holding a Benefit Dinner for the film at Garson, Wednesday Night November 5th, 2014 and will be performing at the LONESTAR COLLEGE North Harris location on November 6th.