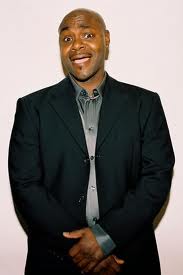 Before Dean Austin started a life of comedy, the medical field was his first passion. But it all changed one day when his best friend from high school dared him to get on stage and do stand up comedy. After that, Dean Austin realized that his true calling was not in medicine, but in comedy. Since then, he’s proven to audiences all over the world that laughter is the best medicine.

Some of his TV appearances include BET’s Comic View, Loco Comedy Jam, and Showtime at the Apollo. You can listen to him on Sirius Satelite Rado, and you can listen to his latest CD titled ‘Funny Worldwide’. He’s entertained not only our troops, but cruise ship audiences as well, making him a popular comedian around the world. He’s been to England, Iceland, Germany, Japan, and Korea all in the name of comedy. And today he’s here with us.

You’ve had the opportunity of performing comedy for cruise ship audiences. What’s that like compared to comedy club audiences?

[Sips a soda bottle, and also sips a water bottle] Interesting analogy. Tell us a little bit about the life of a cruise-ship comedian.

Ship life is ok. I’m usually on a ship for approximately seven days, then I get on another one sometime later.

When you’re not performing on cruise ships, do you perform in Houston often? And what do you like about the Houston comedy scene?

I’ve done several shows in Houston over the years. The thing I like about the Houston scene is that the crowds appreciate good comedy!

Overall, what do you enjoy the most about performing?

I enjoy the feeling you get when you make the crowd laugh and the joy they get after you have a bangin’ show!

What is your most memorable gig?

Showtime at the Apollo!

With so many comedic accomplishments, who are the comedians that have influenced you the most?

Being a long time performer since 1990, how do you stay motivated? And what keeps you moving forward?

What keeps me motivated are the crowds and the whole comedy scene. The experiences are still fresh and exciting to me. Knowing that there are other fellow comedians out there who are in this same fraternity of making people laugh is a good feeling, too.

What is the best advice you can give to other comics?

If it’s not really your PASSION then don’t do it. Money, women, drinking, drugs, or other vices are all distractions and they’re not a good reason to do this.

And what is the worst advice that someone has given you?

To do comedy a certain way that is not YOU. In other words…change your material to fit the crowd.

You’ve been on TV, you’ve performed on cruise ships, and you’ve traveled the world. What’s next for Dean Austin?

Maybe a Randy’s Donuts and an IMAX 4D movie! [Laughs] Hmmm…let me see, more TV, more comedy shows, and more comedy specials. I just love to hit the stage and bring the Dean Austin experience to the crowds on a nightly basis!