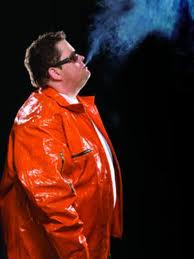 In 2003 Ralphie May was chosen to compete in the first season of Last Comic Standing. His second place finish earned him respect all over the nation. His career took off from there. Ralphie then appeared on The Tonight Show with Jay Leno. There, he became the first comedian in ten years to receive a standing ovation from the audience. His first comedy special Just Correct went platinum in 2004, and the CD version made the top ten list on the Billboard comedy charts. But Ralphie was just getting warmed up. He later followed up with four Comedy Central specials: Girth of a Nation (2006), Prime Cut (2007), Austin-tatious (2008), and Too Big To Ignore (2012).

Ralphie May now lives in Los Angeles with his beautiful wife, a fellow comedienne, Lahna Turner, their daughter April June May, their son August May, and their two dogs, Pimp and Hoochie Mama. Coming back to Houston this past weekend, Ralphie performed seven sold-out shows here at The Improv comedy club. And after taking pictures and signing autographs with every single one of his fans, Ralphie was nice enough to hang with us to talk comedy.

When signing autographs after the show, one of your fans asked you to autograph his belly.

What’s the strangest body part someone’s ever asked you to sign?

Vaginas. I’ve signed a BUNCH of ‘em! Just whip ‘em out, right there in public. It’s crazy. [laughs] I’ve never signed a cock and balls, but I wouldn’t be surprised.

For someone who has accomplished so much in their career, how do you define “success” within the comedy industry?

Too many people are miserable—they hate life. But that doesn’t mean YOU should hate it. They think the money makes ‘em a success. It doesn’t. It’s too fleeting. They can take it all away. If they took away all my money and all my posessions, I’d still be a success because I’d still have my wife and my kids.

[slow tear runs down my eye]

But comedy is a poisonous profession. Lots of late nights and unexpected schedule changes—not to mention the easy alcohol, drugs, and women. Yet, you and your wife, Lahna, have been together for fourteen years. What’s the secret?

Love with all your heart. Just love her. That’s what I do, I love my wife. I love being married and I love being with my wife. Not enough people say that and it’s a shame. They like the idea of marriage, but they don’t like the work and commitment that comes with it. None of it’s easy. And don’t fuck new pussy!

After doing comedy for 23 years, do you feel like you’ve seen everything?

Not at all. Every day’s a new adventure. Even bein’ in the same town, same stage—there’s always a buncha new crazy shit that comes up—and it’s hilarious. It’s always fun.

I go on stage and turn on hundreds of women. It’s a shot to the ego for a guy who’s 400 pounds. It’s like, “Whaaat? That never happens!” [laughs] And to have that affect on people—it’s hot. It’s funny. It’s wonderous.

Gettin hit on by women who are takin pictures with me, whisperin dirty shit in my ear—even though their man is right there—it’s like, “Jesus Christ! You filthy animal!” [laughs]

Aside from dazzling your fans, what about your fellow peers? How important is it to earn their respect?

To me, not important at all. I don’t want the recognition of my peers. Cuz I’ll never get it. I don’t care if they like me. I don’t want everyone to love me. That’s never been my goal. If everyone loves you, you’re doin somethin wrong. McDonalds has the most popular burger in the world. But if you eat it, you won’t shit right for a week.

There’s been a lot of controversy regarding Daniel Tosh and his “rape joke” incident. What’s your take on the whole thing?

Comedy is the last great art form. I’m sick of comedians apologizin and boo-hoo-hooin when fans get offended by their jokes. Daniel Tosh should never have apologized for his rape joke. Jokin about a guy who hurts a child—and then gets raped in prison—THAT. IS. FUNNY. That’s called justice.

NOBODY would say anything wrong about that happenin. That woman shouldn’ta heckled him. Its like, “What’s wrong with YOU lady? You’re takin this way too seriously. It’s a fuckin comedy club.”

Plus, comedians need to work out their jokes. When you see Tosh in concert, that’s his finished stuff. But when he goes to a comedy club, he’s workin out new jokes. And not every one of them’s gunna hit perfectly. Comedians hafta work out ALL their stuff in front of people. It’s the only way. So how dare you take somebody’s work in progress and shit on it.

Now when it comes to writing material, you’re a machine. You’ve had eight successful comedy specials within the past eight years. How the hell do you do it?

[laughs] The majority of the material that I write—I live it. I write it because I live it. And I’ve always written really fast. Which is why at first I got called a “hack”—but really, I just out-wrote everybody.

People were like, “How can this guy have so much new material?” But ya know, if anyone says Ralphie’s a “hack”, just ask ‘em, “What jokes did he steal?” They’ll never have an answer for ya.

When you’re working so hard and doing good things, how do you not let the negativity and the name-calling bother you?

Here’s the truth: People are gunna shitbag on you ALL THE TIME. Alotta comedians succumb to that—especially you young puppy comics—and then they end up quitting stand up comedy. The ones that power through it and stay focused on their dreams will always be a success.

And there’s always gunna be jealousy. But just do you—don’t worry about anyone else. People got mad at me cuz I was takin their spot. I started featurin at age 19, headlinin at 20. You do that, you’re gunna piss people off.

But hey, you saw me perform tonight. Nobody’s doin what I’m doin. Watch my specials—call me a “hack” all ya want. Comedy Central doesn’t think I’m a “hack”! The proof is in the fuckin pudding.

Honing a comedy act is a very slow process. Writing material is a marathon, not a sprint. How long did it take you from the time you started doing comedy to the time you recorded your first special?

I recorded my first CD after almost 10 years. In fact I still have it. It’s my beginning album—the one that started it all. I wanna release it on my next album. as a limited release on an actual vinyl along with the new CD and DVD. It’ll have an album cover that you can roll a joint on.

After everything you’ve accomplished in comedy, is there a finish line? What goals do you want to reach that you haven’t already attained throughout your career?

First, I wanna raise enough money so that all my bills are paid off and my wife and children are taken care of. Then, if my wife lets me, (And I say this with as much pussy-whippin as I’m entitled to) I wanna run for senator for the state of Tennessee. I wanna effect change that way. I wanna be the vox populi—the voice of the people.

I believe in this country, and I believe that one person can effect change. I believe that a man of the people and for the people can make a difference. If you’re not bought and paid for, you can stand up to the ones who are and call ‘em out.

When they voted down in the state of Tennessee last year—the president’s job spill—they voted down 28,400 jobs. I take that seriously. That’s 28,400 families that aren’t gunna have a good Christmas. I find that amazingly offensive. And I won’t have it anymore.

You’re an inspiration. Houston’s comedy scene is greatly inspired by the late Bill Hicks and Sam Kinison. Who are your greatest inspirations?

Being a product of the Houston comedy scene, how does it feel to come back to town?

I’d say it’s bittersweet. Good things happened to me here, but bad shit happened to me here, too. Alotta comics were very mean to me. I got betrayed a lot here. And I’ve had to put alotta forgiveness in my heart. People talked alotta shit about me after I’ve done alotta nice things for them. But ya know somethin? I love ‘em. And they can’t do anything about that.

Got a dear friend that lived with me here in Houston. We haven’t really talked in like, eight years. For years he just bad mouthed me. Now he says I’m not a “hack”—anymore. Truth is, I never was.

But after everything I heard that he said about me, after all the hatred, I never stopped lovin him. Loved him like a brother. I mean, when you go through the worst of times with someone during the fight for your life—you’re hustlin and you’re doin’ every fuckin thing you can to stay afloat—you’re in the struggle. It bonds you. Even though we’re not pals anymore, I still love him. And there’s been alotta people like that.

But I can’t let myself be consumed with hatred for those people. I mean, I’m at a point where I’m just like, “What do I care?” Most of ‘em are asshole alcoholics who have done nothing with their careers. The choices they’ve made have led them to their own misery.

But I can’t deny, I wish alotta those guys had been along for the ride with me. I wish that they had been in the clubs, the concerts, and the TV shows with me. Cuz at the end of the day, they’re really talented and they’re really fuckin funny.

So what advice do you have for everyone here in the Houston comedy scene?

Don’t rush yourself. Quit tryin to be an overnight success. Take the time to study the art and master the craft.

Also, set up your own open mics. Too many comics don’t get out there and set up their own gigs. There was a comic here in town years ago, named Dick Williams. He wasn’t getting any time at any of the clubs, but he was a good business man. So what he did, he set up a buncha spots and booked himself. It got him tons of work, and it generated tons of work for comedians. It was great! It was great for comedy. Nobody else did that. And it’s bad that nobody else is bustin their ass that hard.

And stay outta the negativity! Get away from the negative people in your life. Concentrate on stayin positive. This town has so much talent and if ya’ll had any fuckin heart, you’d be lights out. I’ve seen so many great comedians from Houston just quit. Makes me wanna shank ‘em. Like, “How dare you quit? You’re better than me.” But ultimately they’re not cuz they’re not the ones still doin it. After twenty-three years, I still am—and that’s the difference.

Ralphie May was #3 in Houston’s All Time Five